The Microsoft Audio Dock, Presenter+ are your new Surface gadgets 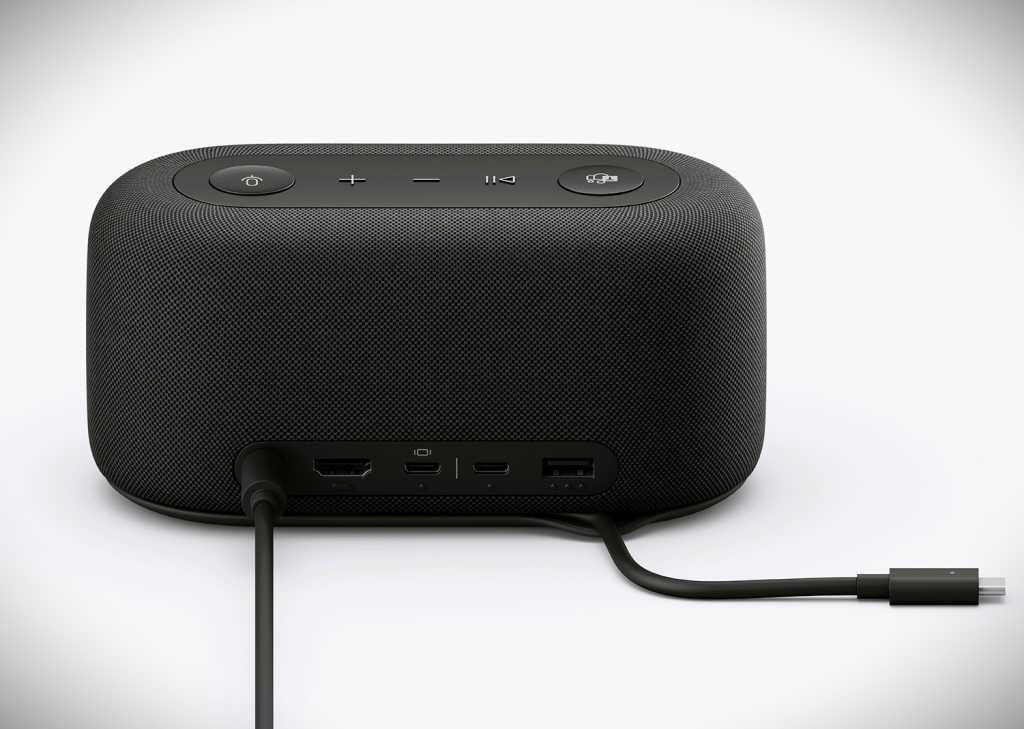 Microsoft announced the Microsoft Audio Dock on Wednesday. This is a new USB-C dock that connects to the Thunderbolt 4 port built into the new Surface Pro 9, Surface Laptop 5 and Surface Studio 2+. As we predicted, along with the fact that Microsoft no longer sells the Surface Dock on its site, is another sign that the Surface Dock is dead.

Instead, Microsoft is going in a different direction, claiming you’ll want a speaker at your desk instead. Microsoft has removed his Cortana feature from his Harman Kardon Invoke in 2021, moving to Teams-enabled speakers for business instead. Now it looks like Microsoft is adapting its latest USB-C speaker to your desk.

Measuring 6.6 x 3.16 x 3.19 inches with a 54 x 48 x 41.5mm woofer/25.9 x 11.6mm tweeter inside, Microsoft looks to be designing a hybrid speaker dock for both work and play. But the matte black dock isn’t limited to Thunderbolt, so you can connect a wide variety of devices. Microsoft also doesn’t use DisplayLink to separate the difference.

Different data types and capabilities complicate matters, but the bottom line is: Audio Dock supports direct HDMI cable connection to an external 4K60 display. You can also connect a second USB-C cable to another display, but you’re essentially splitting the upstream USB-C cable connection. This may result in the inability to support anything other than a 1080p display or his two 4K displays with lower resolutions. (Microsoft says, “Dual 4K output is available if the host PC supports his DSC. [Display Stream Compression]The other USB-C and USB-A ports can only be used for data such as peripherals.

The Audio Dock picture provided by Microsoft doesn’t seem to indicate which USB-C port can be used for display and which can’t, which is somewhat confusing. However, the 7.5W power output from either USB-C port is enough to charge most smartphones, and the 60W power a USB-C cable delivers to a PC is the same as the 60W the new Surface Laptop 5 consumes. matches well with

But this is more than just an audio dock. Microsoft designed this device specifically for Teams. There’s an integrated “Teams button” to quickly join a Teams call and make a name for yourself virtually. The dock speakers also support a wider dynamic range, supporting 200Hz-8KHz for video conferencing and 70Hz-20KHz for music playback. There are also two omnidirectional microphones to help pick up your voice. We can only assume Windows is smart enough to detect the Dock and its speakers and filter out background noise.

Microsoft also offers new devices to help you present in Teams. Microsoft Presenter+ is a small 3-inch remote control that can be used to control slides, among other features. A small, rechargeable (2 hours charge, up to 6 days battery life) Bluetooth 5.1 device includes a Teams button to join a call and raise a virtual hand, and left and right buttons to advance a slide It is A small indicator light also shows if it’s muted.

Neither Audio Dock nor Presenter+ are exclusive to Microsoft Surface devices, but Microsoft clearly designed them with Surface devices in mind. Microsoft hasn’t disclosed pricing for either product, but pre-orders start today. Both will be released on October 25th.