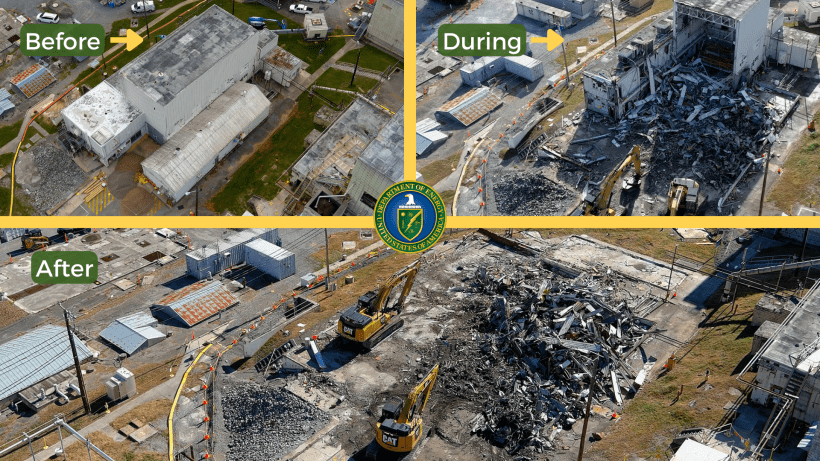 
The Oak Ridge Environmental Management Agency (OREM) announced this week that crew members have completed the first dismantling of a nuclear reactor in the central campus area of ​​Oak Ridge National Laboratory (ORNL).

The Bulk Shielding Reactor complex was built in the 1950s for radiation shielding research as part of the Federal Aircraft Nuclear Propulsion Program. A 27-foot-deep reactor pool filled with water was included to shield the radioactive components contained in the pool. Its mission he was changed to a general-purpose research reactor in 1963 and closed permanently in 1991.

Work continues at the reactor site to reduce the size of debris from demolition and to transport the debris to a disposal facility, according to the announcement. By the end of November, workers will have packed and disposed of 250 truckloads of waste and debris from the project.

According to UCOR, one of the most important tasks prior to demolition was the removal and disposal of irradiated components from the reactor pool. After these operations, the worker drained 130,000 gallons of water from the pool and sent it to an on-site treatment facility. The pool area was then decontaminated, filled with a concrete mix and closed.

In addition to stabilizing the reactor pool, UCOR workers removed asbestos and other waste from the facility.

Bulk Shielding Reactor is one of more than 12 research reactors built at ORNL over the decades and one of 16 inactive research reactors and isotope facilities that EM is working on at ORNL was. The crew continues preparations for deactivation and demolition at the adjacent Low Intensity Test Reactor and Oak Ridge Research Reactor. Both are scheduled to be demolished soon, according to UCOR.