City working to determine cause of North Central home explosion 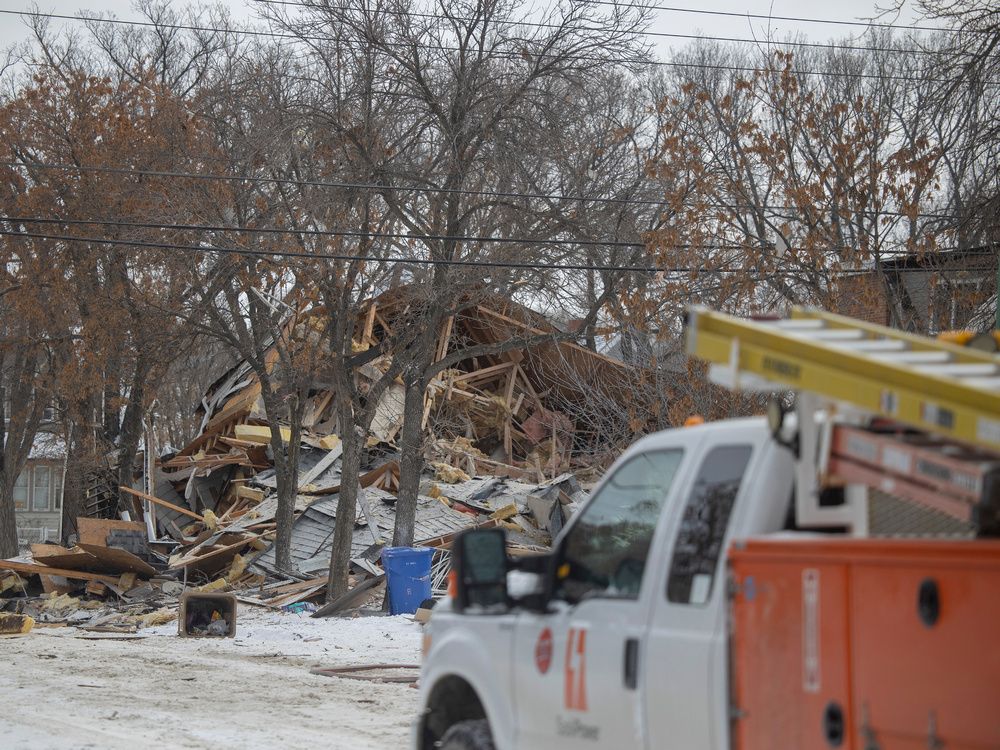 Cleanups are underway at former homes in the North Central neighborhood as firefighters work to determine the cause of the “massive explosion” that rocked the city on Sunday.

Gord Hewitt, deputy chief of Regina Fire and Protection Services, said the situation was “pretty unique” and it could take time to determine exactly what happened.

Sign up to receive daily headline news from Regina Leader-Post, a division of Postmedia Network Inc.

By clicking the sign up button, you agree to receive the above newsletter from Postmedia Network Inc. You can unsubscribe at any time by clicking the unsubscribe link at the bottom of the email. Post Media Networks Inc. | 365 Bloor Street East, Toronto, Ontario, M4W 3L4 | 416-383-2300

Thank you for your registration.

A welcome email has been sent. If you don’t see it, please check your spam folder.

The next issue of Regina Reader Post Headline News will arrive in your inbox soon.

“A case like this is not typical,” Hewitt told media on Monday. “Not particularly on this scale.”

At 11 a.m. Sunday, emergency services responded to a “massive explosion” at an empty house on the corner of 6th and Retallack streets.

Regina Police, Fire and Paramedics were the first to arrive on the scene and found the four-unit building demolished.

Only minor injuries were reported, Hewitt said, with paramedics treating one person for a glass-related scratch after the window was blown out.

The building, which is now collapsing, has been confirmed to belong to the Regina Housing Authority, none of the units are occupied, and the building is boarded up.

Hewitt said the blast has reported damage within a radius of several blocks from the building. On Albert Street, a window was blown out he was four blocks away. Several properties have been damaged, as well as nearby vehicles.

The apartment next door was also “extremely damaged” and two residents were evicted.

The explosion caused the loss of power in some areas, but was restored by the SaskPower crew, who had been deemed safe by the crew on site.

Transportation buses in the city were brought to the scene for those displaced or evacuated from their homes due to the damage, as places to take refuge and stay warm while responders worked.

“The public safety aspect is ingrained in our service, and I think the crew did a great job making sure it was handled,” Hewitt said.

A search of the site is currently underway, with crews clearing debris and confirming that no one was inside at the time of the explosion.

“The site is still unstable as our crew continues to work to determine the cause,” Hewitt said.

Heavy equipment was brought in, including a backhoe to assist in the work. Hewitt said there is a lot of material to sieve and no timeline for how long cleanup will take.

“It’s going to be a difficult task because of the scale of the damage and significant damage to neighboring properties,” Hewitt said, adding that there are still no clear indicators of the cause of the explosion as the investigation continues. added.

Members of the RPS Bomb Squad were contacted on Sunday and continue to work with fire inspectors to provide “their full knowledge of the blast incident.”

“We felt it would be a good tool for investigators to use to assist with their investigations,” Hewitt said.

He made no speculation as to what happened, but said the incident was not considered suspicious at this time.

“We need to complete a study to determine that,” Hewitt said. “As far as our investigation goes, we’ll be pulling away from the place in bits and pieces, and it’ll be extensive.”

The building had an active natural gas line, but it was turned off by SaskEnergy technicians on Sunday.

The rubble where the building stood remains blocked and traffic controls are still in place as cleaners work.

“Security will remain on site until the investigation is complete and we are confident the property is safe,” Hewitt said.

News always seems to fly fast to us, and from COVID-19 updates to politics and crime and everything in between, it can be hard to keep up.With that in mind, the Regina Leader-Post afternoon headlines A newsletter is delivered daily to your inbox to help you stay up to date with the most important news of the day. Click here to subscribe.