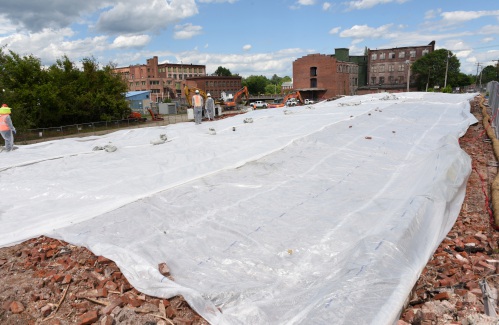 ORANGE — Town receives $3.4 million in state funding to clean up debris and debris from suspected arson at former grain mill at 16-36 West River Street on June 4 It was announced Friday that it will.

The flames sent embers into the air, some of which fell on an empty former blacksmith shop near 24 East River Street, causing such damage that it had to be demolished. Vacant buildings at 58 South Main Street and his 50 were also damaged.At least 20 fire departments responded to reported blaze at 11:45 a.m.

However, town administrator Gabriele Volker said later that month that Orange does not own the land and is therefore ineligible for public subsidies to offset cleaning costs. At the same time, she said, the U.S. Environmental Protection Agency advised the town not to take ownership by collecting taxes because the orange would be responsible for cleanup costs.

Three boys, aged between 12 and 14 at the time, were identified on June 6 and face criminal charges in connection with the alleged arson. Due to their age, their names have not been released by authorities.The State Environmental Protection Agency covered the rubble for public safety.

Voelker reported in June that the cleanup had spent just over $400,000 in American Rescue Planning Act (ARPA) funds, which was originally expected to cost $3.8 million. This figure he corrected to $3.4 million. This is the same amount that Orange expects to receive from the state.

Selectboard Chair Jane Peirce said Friday that the town has $600,000 of remaining ARPA funds and that the state’s funding is conditional on the ARPA funds being spent on cleaning up the site. She said state money is a big relief for Orange.

“It’s a huge one,” she said. “Being able to wipe it out would make a big difference in the world.”

“We are so grateful to Congressman McGovern, Senator Commerford and Congressman Whips for their tireless work and hard work on behalf of the City of Orange. Words cannot adequately express our gratitude.” “This will help clean up a very unfortunate and devastating fire event that we could not afford to repair, and will open up an opportunity for the town to clean up the site and rejuvenate downtown.” I guess.”

“Rep. McGovern, Rep. Whips and I are united in our love for the City of Orange and our deep appreciation for our community leaders and first responders,” Commerford said in a statement. . “Today, this local, state, and federal partnership is providing much-deserved state aid to support the town’s recovery efforts after the June 4th fires and to strive to become even stronger after the devastation. provided to.”

Whips said that Commerford and McGovern had been in contact with Orange before the fire went out, offering their resources.

“As an aside, Jim and Joe are Democrats, Governor Baker is a Republican, and I am an independent,” she said in a statement. “This kind of cross-border cooperation is how governments are supposed to work and we are proud to be involved.”

“The June fire was a horrific tragedy,” McGovern said in a statement. … I look forward to seeing progress thanks to this funding and I know Orange will come back stronger than ever. ”