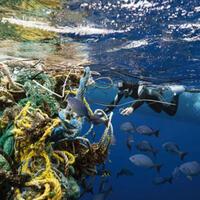 The Ministry of Environment, Urbanization and Climate Change said that about 180,000 tons of waste have so far been recovered from the sea in work carried out within the state’s action plan on marine litter.

The Ministry reaffirmed that the Circular on the Preparation and Implementation of Local Action Plans on Marine Litter was issued on 10 June 2019, and Local Action Plans have been prepared in 28 coastal provinces covering a period of five years. pointed out that there is

With the implementation of the circular, measures have been taken against the formation of marine debris and research has been carried out to clean up existing marine debris, the ministry said.

Two skimmers were deployed in the southwestern part of the bay in the Marmaris and Fethiye districts of Mugla to support the work carried out to keep the sea clean.

According to the ministry, the skimmer, which began operating in July, has so far collected 13,121 kilograms of marine litter, making a significant contribution to cleanup efforts.

The ministry said governors of states with cleaning projects must annually submit an activity report to the ministry with information about the work being done in that state.

In a statement, the ministry added that it was “closely monitoring the effectiveness of the activities and measures being implemented in the state.”

The ministry also said the “Zero Waste Blue Campaign” launched by the president’s directive was carried out within an effort to raise public awareness of the cleanliness of the ocean.